A downloadable game for Windows

It's a family-run business, so don't be surprised if it breaks down. Just stay in your vehicle. Whatever you do, don't get out and look for an exit.

This game is inspired by my irrational fear of having to walk out of a haunted house or ride during a breakdown. I love dark rides, but I've always been scared of those smaller establishments in the middle of nowhere. Imagine if you decided to visit one on a whim without telling anyone where you went… no one would know where to look for you…

At least this ride has multiple exits...

Really cool idea. The endings could use some uniqueness.

Thanks for playing! Yeah, I got a bit rushed at the end of the game jam. If I return to this project I'd definitely like to expand the endings and make them scarier!

Very interesting. Some unique things going on here and I love the cute/horror aesthetic in this.

Thanks for taking the time to play!

It’s been awhile since I’ve played a more light-hearted horror, but I was genuinely impressed, mostly because the game’s design is very curious. The game ends not long after it begins... and yet, it doesn’t. Play it for yourself to know what I mean. A game I initially thought was going to be the shortest is the game I ultimately spent the most time with. Well done.

Thank you, that's how I intended the experience so I appreciate your comments greatly!

This was such a neat experience! I love the atmosphere and how it really feels like a dark ride. Very cool!

i LOVED THIS so much!! i think this is my favorite entry so far. all the little areas are so cute and vibrant and i loved how when you head to the exit, the cutscenes are different for each area you break down in?? some of them were unexpectedly really funny to me like the one where the guy is hiding in the wall lmfao. this was so clever and cute. love the accessibility features too. and wow @ you making all the assets yourself!!! amazing work

Thanks for such a kind and detailed comment! That's great it was funny for you, I find there's a thin line between horror and comedy sometimes :)

my playthrough starts at 7:50

Thank you for playing!

I did get legit scared a couple times. It's a really cool idea! Great job! 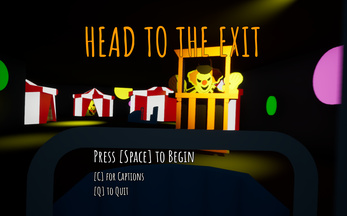 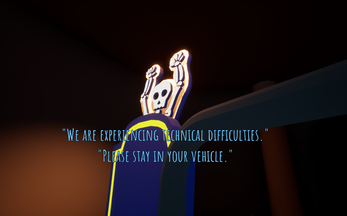