A downloadable game for Windows

Join the Human Defense Department's last ditch effort to save the world: by teaching the brightest students in the nation how to hack and scramble the brains of the enemy. Follow the journey of Mina Lovelace as she seeks to prove herself worthy of following in her mother's footsteps. And also tries not to embarrass herself in front of her childhood crush in the process!

Follow our tumblr for behind the scenes art or ask us questions! https://coderomantic.tumblr.com/

I have some difficulties in installing the demo : a notification " This app can't run on your Mac"  - macOS Catalina

Thank you for letting us know! The demo is a couple years old now, we are aware of issues on the latest OS. When a new mac demo is available we will update it here!

Really enjoyed this, obvious labor of love. I was familiar with some of the concepts, but it was nice going over recursive functions, for loops, etc. Most educational games don't do much but paste a by-the-numbers plot over their content, but this game has actual worldbuilding, interesting locales, cute characters, and an original soundtrack. Looks like it's been about 1.5 years since the last update, but I'd totally appreciate if they were just taking their time to release the full game next instead of bits and pieces here and there.

Thanks for the kind comment! We release the full game in April 2020, stay tuned! :)

Looking forward to it, thanks for the update!

This was great! Just by looking at the cover, it tells you, you are going to be in a world of romance and computers. I played it and I have to say, wow. It was great, the artstyle was great and the storyline was great. Keep up the good work

Thank you so much! We are releasing the full game in April 2020, hope you enjoy it when it's done!

I loved this. I loved programming when I had a great teacher that explained stuff quite well and made me quite excited to try making my own games! But as I progressed through my course my teachers weren't as good and to this day I still have trouble with C++ or object-oriented programming in general. This rekindled that love for typing code and built a bridge between my love for C and my fear of C++. But enough of my story - I want to talk about the game!

The gameplay is very approachable! I liked fixing small parts of the code by clicking through it to do different choices, even though I do have experience with programming. Manually typing code is a nightmare, but when I wanted to truly learn and understand the code (what is it about) there's a pretty useful and entertaining Dictionary that explains what a particular word of the code does what. It explains semicolons, curly brackets, arguments, class names (what is a class about?) to even mundane numbers! I spent a lot of time reading the code and the Dictionary and just understanding the code even though I knew the choices I made was correct at the time, and when I got it wrong because I didn't read properly, the characters talk out the problem and give further explanations about the code and what I had to do.

The dialogue system is a little basic though, lacking even a way to view previous messages (so you're screwed if you skip over some dialogue). Also it lacks transitions which makes scene switches feel grating (like from class to cafeteria, and back). I guess it's excusable since this is made out of Unity - maybe I'm just too used to the comfort of RenPy based novels.

The two main characters are very likeable, but the game doesn't focus too much on dialogue, which is bad for the side characters as they don't get much screentime (although they're interesting nonetheless). This is also a good thing though since it allows you to focus more on the gameplay/programming, so you're learning something, Very YourMileageMayVary!

To say the least, I definitely recommend this game if you're either looking to learn programming, or have a dessert of a romance story. But it definitely helps if you do like the story because it'll motivate you to learn! And thanks to everyone involved for such a nice game!

Hey, thanks so much for the kind and useful feedback! We loved hearing your story too!

Right now we are finishing the story content and then we will do a polish pass on the features before we release. Viewing dialogue history is one of the features on our list, so it's great to hear that it's important to you! Thank you, we hope you enjoy the full game as well!

Edit: After chatting more, we think the "lack of transitions" described above may be a Linux bug. If you're using Linux and experiencing issues, please let us know!

I love this game so much. I'm actually about to start a college course that goes over coding and this is helping me a lot with learning some the basics. I can't wait for more updates!!!!!

Thank you! We're so happy to hear this. Good luck with your course!

Hello! I love this game so much! I got to the end of the latest preview and was left longing for more. I shall wait patiently for the next update and I hope all is going well for you!

Hey lilyhavok! We wanted you to know that we released Chapter 5 and are already working hard on Chapter 6. Thanks for liking Code Romantic!

Ah! Downloaded immediately! Thanks for the heads up =D

Great game! I think it is a great way to learn coding. My daughter and I both enjoyed it. Thank you for the coding lesson! :)

Thank you so much! I hope you'll also enjoy the new chapters as they come out! :)

I will thank you!

Hey VikingQueen! We wanted to let you know that we recently updated Code Romantic to include Chapter 5, and we are hard at work on Chapter 6. Also, I don't know how old your daughter is but I thought you'd like to know that we plan to include parent and educator guidelines soon so you know what kind of situations to expect in the final game. The rule of thumb we've been following is: if you're okay with your children reading Harry Potter or Twilight, Code Romantic is probably fine. Let us know if you have any questions about the game! Thank you!

Pardon me, but I have some difficulties in installing the demo : a notification " This app can't run on your PC " showed when I tried to open the game.... could you help me with some instructions for the Windows version? (^_^")

Hey! Thanks for reaching out. I did some research on this, and it looks like some versions of Windows do this if they don't recognize the app or game. Here's a link I found that might help you: https://www.drivereasy.com/knowledge/this-app-cant-run-on-your-pc-solved/

Edit : It seems that the OS for my laptop is 32-bit version and I can't enjoy the game till I update the Windows :')

Oh, I see! Thank you for telling us this! We should have made a 32-bit version, I apologize. Right now we are working on the next game update. I will upload a 32-bit version with the update so you can play. Sorry for the delay, and thank you again for letting us know!

Hello! We just updated to include Chapter 5, and we've added a Win 32 version. Please let us know if you have any problems. Thank you!

Oh my... oh my... I am so excited to finally try this version :'D *Halllelujah plays in the background*

Bless you for presenting this beautiful vn; not only the graphic, but also the pacing of the narration is pretty well, and the technical explanation is rather easy to comprehend; making me pray that this vn was the tutor in my programming learning years ago :'D

And... I can't stop fangirling over every tiny detail interaction of Mina and Leon (never I feel eager to ship the protagonist -not as myself- to the Love Interest this hard, they are the most adorable couple that I could fight bloods and tears to make the ship sail (T^T )/  ).

Although Jackie's act as makes it a bit of cliche of Mean Girls, but the promising plot of the cyber war and Mina's experience in the camp ()  will keep me in tune for the full release ^^

Lovelace Harry PotterLovegoodis that typo of the name?how the Heaven the witch become muggle, the programer moreover?LovelaceAda Lovelace, the first programmer in real life

Wow, thank you for the detailed and thoughtful feedback! We are so delighted that you are enjoying the story of Mina and Leon. We're working hard on the next chapters, where it will continue to evolve... and you will learn more about Peter and Jackie in chapter 6. That is so cute about Lovegood and Lovelace! :D

If you want to be the first to know about Code Romantic news, please sign up for our mailing list: https://madmimi.com/signups/120473/join And we would appreciate it if you would tell your friends about the game too <3 Thank you so much!

really excited to see where this game goes

Thanks for taking the time to play! More chapters coming in February :) 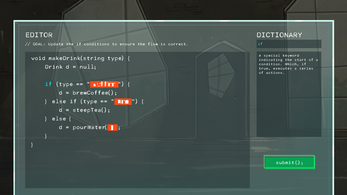 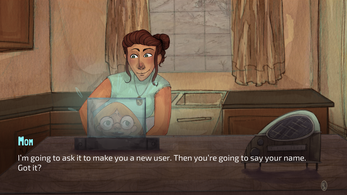